Cherry Mobile has always tried to be at the forefront of mobile technology innovation in the Philippines. Even at the shadows of giant international companies with virtually deep pockets for marketing and sales, the local company tries to thrive with its plethora of mobile devices SKUs.

I must admit, we didn’t love the former Flare S series as much as we love the current lineup due to 2 glaring reasons: software optimization and price. Flare P1 series also got bad to average reviews from our review team as well. True to the company’s humble values, our reviews and your feedback were well taken and appreciated. Cherry Mobile posed themselves to apply changes to their current and upcoming iterations.

Cherry Mobile Flare S6 Selfie, being their hero Flare S6 product, touts all the bells and whistles most Filipinos can ask for. In a nutshell, it has everything we hoped for in their next Flare S series. It’s a near-perfect lifestyle product, infused with all the tech enablers to fuel your mobile life: capable selfie and main cameras, attractive price point and highly acceptable performance.

How does it look and feel?

Holding the Flare S6 Selfie felt different compared to Flare S5 and Flare P1 Plus. Its metal body and robust build made it looked and felt premium. The rounded bezels, minimalist-looking backplate and USB Type-C gave it an attractive yet functional vibe.

The antenna lines of this device are wildly exposed. This somewhat ruins the design preference of some people, but I’m digging it.

Physical button placements are very accessible whether you’ve got small or big hands. The physical home button with fingerprint sensor sits below its 5.2-inch FHD IPS display. As expected from a home + fingerprint sensor combo, it proved to be very useful and more accessible, albeit nabbing a huge space on the phone’s lower bezel. Pressing the home button takes you to the home screen, but tapping it will not trigger anything. There’s haptic feedback when you tap the home button, but it would have been nice if there’s an option to set a shortcut to home when it’s tapped.

A 16MP Samsung S5K3P3 camera, earpiece, notification light, front LED flash and sensors sit on top of the display. We’ve got much to talk about its camera and front LED later.

Is it good for viewing photos, watching videos and listening to music?

Flare S6 Selfie got itself a 5.2-inch display with IPS panel and full HD resolution. PPI is 424; this makes photos and videos look sharper compared to devices with lesser PPIs. Its screen got good color saturation, sharpness and vibrance.

Since the phone runs on the latest Android Nougat, you can even set its DP smallest width to something bigger to maximize screen space. Thanks to our friend from PinoyScreencast, Randolph Novino, for telling us this tip.

Flare S6 Selfie is surprisingly a good gaming smartphone. I tried playing 2 of the resource demanding games this quarter: Rules of Survival, a pseudo-PUBG game on mobile devices; and Shadow Fight 3, a 1v1 fighting game.

The smartphone handled the Shadow Fight 3 pretty well. Game is definitely playable despite minimal lags. Rules of Survival, on the other hand, has an average of 20fps at full load and medium quality settings. After a full round, the game suggested to adjust the quality settings to low to minimize lag.

Check out our full gameplays of both games below:

Oh, let’s zero into its software.

One of the latest features of the Cherry Mobile Flare S6 selfie is its brand spanking new OS, which sits on top of Android Nougat. Fittingly called Cherry OS, it’s a homegrown software, which was locally developed by Cherry Mobile.

The Cherry OS is installed with applications, which the company thinks that would benefit the end-users. This is clear proof that the OS isn’t just a skinning of whatever available resources for their developers. However, the Cherry OS is like a double-edged sword: an innovation imbued with all the bells and whistles for the consumers, but also a futile attempt of the company to show that they are still up in their game.

Cherry OS is laudable, albeit with some optimization issues that we’ve experienced during our test. There are times when the OS becomes non-responsive to simple gestures and actions. There is no scarcity of pre-installed applications; some of which may easily be uninstalled. Nevertheless, here are our recommended pre-installed applications so you know which ones you should remove:

Do note though that at the time of this writing, Cherry Mobile hasn’t rolled out an update of the Cherry OS. During our trip to Thailand with their product head and VP Lonson Alejandrino, they are poised to release a patch at the last week of November.

Does it live up to its ‘Selfie’ monicker?

Flare S6 Selfie is a step up from its predecessors when it comes to photo taking capabilities. There are however qualities that need to be improved from contrast down to saturation. Don’t get me wrong – the quality of the photos we took don’t look bad at all. Its S5K3P3 sensor is a very capable camera sensor, but I really think that Cherry Mobile hasn’t fully set it up to its full potential. I’m pretty sure that a software patch could quick fix things up.

The selfies I took look good but devoid of stellar qualities. The camera sometimes struggles in low light, but does its job quite right.

Cherry Mobile Flare S6 Selfie embodies the original Flare we had years ago – powerful without breaking the bank. It isn’t perfect, to be honest, but the value you get over the amount of money you pay on this device is definitely worth it.

Cherry Mobile needs to optimize and improve the Cherry OS though. At its present state, the latter is not at its top shape and form, which might somehow break the experience for some consumers. 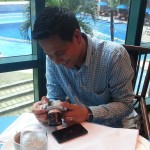 vivo is Giving Away a Ford EcoSport and PhP10,000 Worth of Items for its Christmas Promo!