Cherry Mobile Superion Vector sports a 7-inch IPS LCD Display with a full metallic color finish around the device. It basically looks like a normal smartphone but a lot bigger, somewhat unfitting if you’re going answer calls in public. Technically, the Superion Vector has only a bigger screen compared to other quad-core devices by Cherry Mobile.

It is heavy compared to other phablet/tablets launched by Cherry, but I don’t find that necessarily negative because it adds the firmness and solid structure of the device. The earpiece together with the 2-megapixel camera is located at the front of the device, while the 5-megapixel back camera with LED flash is at the back.

The physical buttons including the microSD slot are located at the right side.  The headphone jack and microUSB slot are placed atop the device. MicroUSB also supports OTG cable, so in case you have presentations or documents from your hard drive, you can easily view it from your Superion Vector. The latter also supports Dual-Sim technology which is actually hidden at the secret compartment at the bottom.

Superion Vector’s back panel reminds me of the quality and feel of Starmobile Diamond D2. It feels very solid and robust, albeit too fingerprint magnet. Take a look at the photo below to see what I mean. 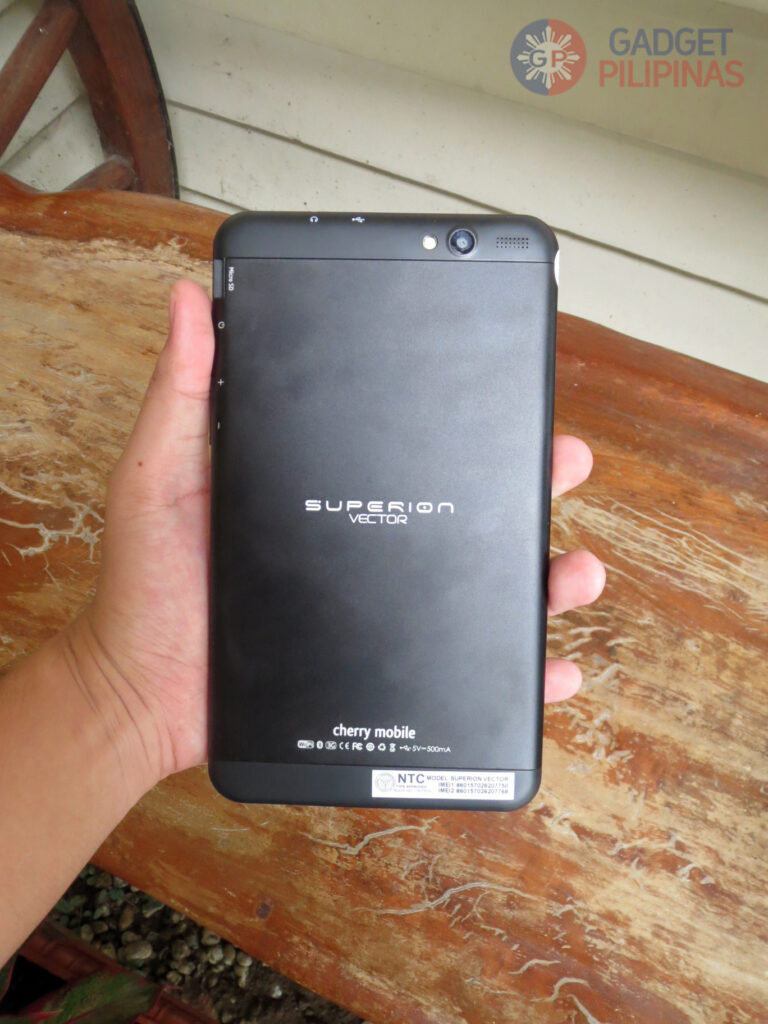 The Cherry Mobile Superion Vector is powered by a quad-core processor, Mediatek MT8382 with a gigabyte of RAM. It has Android Jellybean 4.2.2 pre-installed. With its 16GB of free space, you can store whatever you want: games, camera editing apps or social media apps. If it is not enough for you, you can easily put up to 64GB of space to its microSD slot. Antutu benchmark result shows 16k score, somewhat predictable because of its 1 gigabyte of RAM and Mali-400 MP GPU. Bigger screen consumes more memory and GPU power. It’s good to note that the Superion Vector performs amazingly well despite the latter. Playing in a 7-inch phablet like the Superion Vector with graphics-consuming game like Dead Trigger 2 is relatively appeasing because not only the screen is extensive but the viewing angle is also acceptable. Well, that’s also somewhat expected for a game that runs on Unity engine. But, you’ll be surprised to know that even high-caliber games such as Modern Combat 4 also plays very well on the device although with noticeable lags.

The 2,500 mAh battery lasted with just only a day with full phone and tablet usage.

Here are our benchmark results:

Cherry Mobile Superion Vector has 2 cameras: a 5-megapixel camera at the back and a 2-megapixel front-facer. These are the sample photos that we’ve taken and we think the quality is considerable. What’s your take on these photos?

The Cherry Mobile Superion Vector has a firm and hefty appearance. In addition to this, quad-core processor defines its power, making it capable to run up-to-date applications. Despite having 1 GB of RAM and Mali-400 GPU, the Superion Vector surprisingly operates amazingly fast compared to other phablets by Cherry Mobile.  It is now available to all Cherry Mobile outlets and you can purchase this bad boy for just 5,999 pesos only!