In this review, we’re going to talk about a smartphone that has the following highlight features: 5-inch screen with minimal bezels, rear power button, and Android 4.4 KitKat. Is it 2014 all over again? No, but we are going to talk about something that was first shown to the public last year, the SKK Mobile V2.

This rather elusive smartphone was subjected to the Gadget Pilipinas unboxing treatment recently. And now, it will be the topic of yet another of our ever-helpful full reviews. So, what do you need to know about this handset?

What’s in the box? As we have touched on our initial unboxing and impressions post for the SKK Mobile V2, it comes with the following items inside its retail box:

As you can see, the retail box and its contents are nothing out of the ordinary. But what about the phone itself? Well, just by looking at the SKK Mobile V2 and its main features after unboxing it, you’ll know immediately what makes it different. First of all, it comes fitted with a 5-inch qHD display in a way that’s said to give it one of the thinnest bezels on any local handset to date. We don’t really get why that’s a big deal, as it can actually be problematic for some people in terms of usability, but it’s there to be appreciated by those people who do.

The SKK Mobile V2 also has a built-in heart rate sensor, located right below its power/lock button which is present at the back. Look familiar? That’s because you probably saw it first, along with the rest of the world, in the LG G2 when it was announced and released a few years back. The SKK Mobile V2 aims to deliver the same, er, experience for a lower asking price.

The rear cover itself is also worth mentioning. It has a somewhat slippery, glossy plastic finish, but it isn’t that hard to handle given that the SKK Mobile V2 isn’t that big of a phone. And the front of the phone, of course, has glass on top of the touchscreen display, just like pretty much any other Android smartphone that’s out today. According to SKK Mobile execs, the V2 actually is about bringing the performance of more expensive models to more and more people. “Para sa masa,” as it were. Well, who would complain about that?

When you get right down to it, there isn’t much that’s new about the V2, despite it using a non-conventional overall design and even using a novel sensor (for the heartrate).

To that end, we think it’s fair to say that if you have used any entry-level to mid-range Android phone in the past 12-18 months, then you probably already know what the V2 is all about. Its rear and front camera combo isn’t the greatest, and the audio performance is decidedly average, and yet there isn’t really anything that can be deemed “wrong” about it.

The above camera sample show that the V2’s rear camera is able to take decent-looking photos with enough ambient lighting, but suffers in darker environments. Subjects also have a distinct lack of sharpness, especially if the use of flash is required. In the software department, the V2 makes do with Android 4.4 KitKat. Not the latest version of Android as of late, but still definitely one of the most widely supported and app-compatible versions of the OS out there.

And yes, there is a dedicated app for the heart rate sensor. And if you’re really into fitness, you can easily download more such apps, as well as apps belonging in different categories, from the Google Play store. The V2’s standard battery lasts long enough in a typical work day to not cause any suspicion. That is to say, any normal smartphone user should make it from home to school or work (and back) without having to worry about needing to recharge the V2, unless he games or watches movies for about 4-5 hours nonstop. 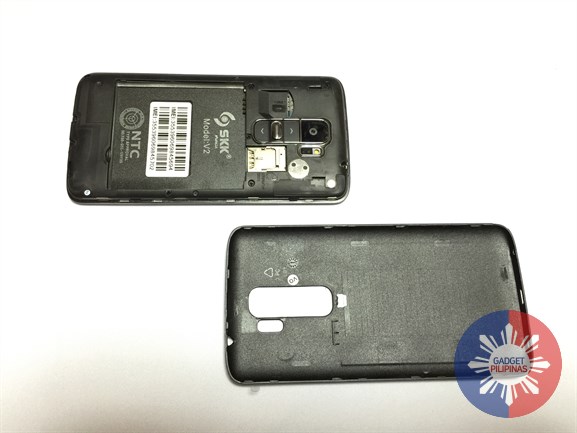 We recently reviewed an Android smartphone with an even lower price tag than the V2, and while we weren’t overly satisfied with that particular phone’s performance, we came to terms with the fact that it probably wasn’t meant to wow us anyway. We think the exact same thing applies to the SKK Mobile V2 as well.

The V2 offers the usual bag of Android goodies at a price that is even more tempting now than when it was first announced last year. And it has a unique look that will at least differentiate your phone from the hundreds of others that you will see as you go about your day, if you ever get it.

If a decent performance and eye-catching look are all that you want from a phone, then by all means, go and get it. Otherwise, we can name at least One alternative that might be more worthy of your money.