Powered by an Intel Atom Z3735F, with processor clocked at 1.8Ghz, the MAIA Smart Tab features a Smart boot system that basically allows the device to boot 2 operating systems. With this device, the need for 2 devices – one that runs on Windows, and another one that runs on Android – may be curbed. On the technical side, having both operating systems compatible to a single device is quite a feat. 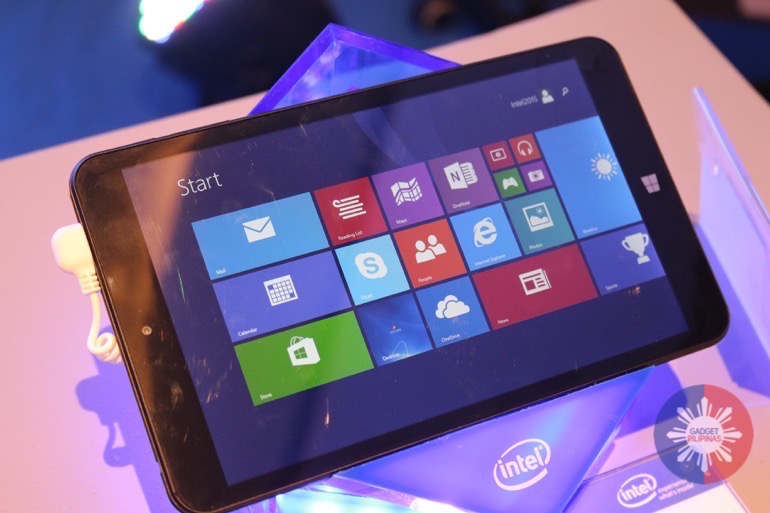 Apart from its powerful mobile processor, the MAIA Smart Tab has a 32gb internal memory and may be expanded via microSD. It has an 8-inch 1280×720 (HD) screen and packed with 3800mAh battery. The tablet also has a 5mp rear camera and 2mp front camera.

The device is made of plastic, but the construction is well built. The ridge on its sides help me easily grab the device especially in portrait orientation. Its bezels are quite wide, which most of you might find unappealing.

There are a total of 3 hardware keys – (top to bottom) sleep/wake button, volume up and volume down. It has 1 capacitive button – a Windows key; and 2 ports – 3.5mm headphone jack and a micro USB port.

Its HD screen is very responsive, and while it isn’t OGS, the contents displayed on screen are quite bright and clear.

The device has 2 separate partitions that may be accessed via software trigger. We would like to assume that the primary partition is Windows because it’s the first OS to boot up. Setting it up for the first time was a breeze. In fact, it only took us around 5-6 minutes to setup our Microsoft account on the device. I was prompted to upgrade to Windows 10, but I didn’t proceed because I was afraid I might run on some issues eventually. Later, I got tipped by Louie Diangson of Yugatech that he successfully upgraded it to Windows 10 with zero issues.

Switching to Android is as easy as executing the OSSwitch app. The device booted to Android in less than 30 seconds. I didn’t need to setup my Google account because it went straight away to the home screen.

Having a device that can run Windows and Android operating systems has advantages and disadvantages. On the good side, you’re given the option to switch to a mobile-centric operating system – Android – that allows you to access your favorite games and even applications. If you fancy playing Clash of Clans (that is not available for Windows users unless you install Bluestacks x Android) or sharing photos on Instagram, the MAIA Smart Tab got you covered because it has Android preinstalled in one of its partitions. If you want to use Microsoft Office and other productivity applications available on Windows, the tablet also got you covered. Simply pair up a keyboard and mouse via Bluetooth or use a USB OTG for other peripherals and you’re on your way to productivity land.

There’s a small caveat on this implementation though – since internal storage is effectively divided into 2 parts, the available space per partition is halved as well. The Smart Tab has a total of 32gb internal storage; divide then you’ll get 16gb per partition. For Windows, 4 to 5gb is already used by the operation system; and for Android, around 3-4gb is snatched away from you. This requires you to save up for a microSD card so you can extend the tablets storage to 32gb or 64gb more.

The MAIA Smart Tab is the country’s most affordable dual-boot device. We’re going to fiddle with this tablet for a couple of weeks and give you our full review accordingly. Meanwhile, we highly encourage you guys to comment your questions on our video or on this article to we can address and feature you on our review.