Home Accessories My first night with the Fitbit Alta HR In June last year, Fitbit came out with the Fitbit Alta – one of the sexiest fitness trackers to ever hit the market. We had a blast reviewing the Alta and gave it high marks for looks and performance.

As a tracker we knew Fitbit would deliver the basics: count steps when you’re on the move and record the lack of movement as sleep. Did we wish it could do more? To be honest, we did, but we also knew its slender profile couldn’t really hold much hardware. The Alta didn’t have a heart rate (HR) monitor, which means that estimating calorie burn wasn’t as accurate. If you want a HR monitor, you’ll have to purchase it’s big brother, the Charge HR. The Fitbit Alta is a stylish, basic fitness tracker done right . Now if only…

Fast forward ten months later, imagine my surprise when they announced the launch of Fitbit Alta HR. My first thought was, “the addition of a heart rate monitor will make it more like a Charge HR and less of an Alta“.

Boy, I was wrong. At the media launch, Alex Healy, Fitbit’s Head of Product Marketing for Asia Pacific, was on stage to give us insights on what makes the Fitbit Alta HR different from the first one. Apparently, those two letters, H.R., make a world of difference without making changes on the svelte profile of the previous version.

Not only is the HR now embedded in the Alta, it’s what the addition of their version of a heart rate monitor can do to the wearer’s overall health. The basics are covered just like the first Alta and, due to the addition of the HR, it can now count calorie burn more accurately. What’ intriguing is the use of HR to monitor your sleep like never before.

Mr. Healy talked about how the Fitbit Alta HR can look at the quantity and quality of sleep you get every night. No doubt, sleep is important for one’s overall well-being but one would reasonably expect to hear more about what a fitness tracker can do when you’re on the move than when you’re resting. But as Mr. Healy delved deeper on why we need to know how we sleep, everyone in the small gathering of media representatives was convinced, Fitbit is on to something here. With this new capability in focus, Fitbit effectively places sleep quality at par with fitness activity in the wellness scale.

Not going into detail yet (I’ll save that for the in-depth review – after a few more nights of sleep) but let me just say I  love the insights at the bottom of each sleep stage.

Mr. Healy also touted the Fitbit Alta HR’s ability to automatically identify the type of workout one is doing. This made me go “oh cmon…” and will be on the look-out for this feature as well.

Check out our review which will be up in a few weeks. 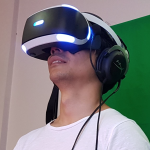