Cherry Mobile has just started rolling out its smartphones powered by Android Nougat. One of them is the Desire R7 Plus, which is now available in stores. It’s a 5.5-inch smartphone with decent specs that caters for the budget conscious who are looking for an all-around phone.

The phone has your typical iPhone-inspired design and feel, which is sleek and elegant looking as what you might expect. There are no capacitive buttons on its chin as the phone uses on-screen navigation buttons. The power/lock button and the volume rocker are located on the usual right side of the phone. The left side only has the card tray that accommodates a nano and micro SIM card for dual SIM capability. The second slot also doubles as expansion for microSD. On the top is a 3.5mm audio jack while the bottom has the usual micro-USB port and microphone. 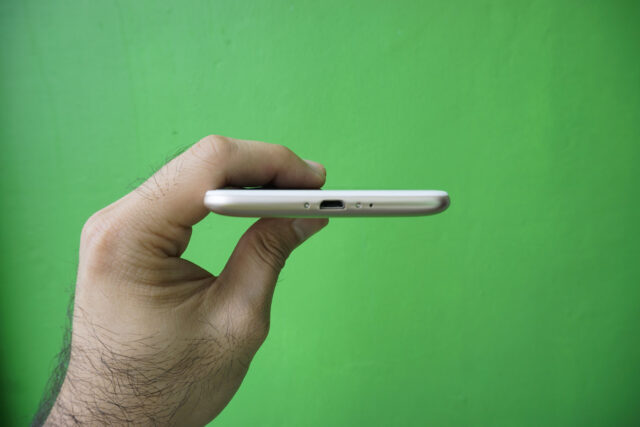 On the back you have the 13-megapixel rear camera and an LED flash. A fingerprint scanner is located just below the camera while the loudspeaker is situated at the bottom right. The phone is encased in a solid piece of polycarbonate but mimics the feel of an all-metal unibody. Despite not being an actual metal, its plastic body gives the advantage of being more lightweight than your usual 5.5-inch phones.

The display has a 5.5-inch IPS LCD panel at 720p. This gives the display wide viewing angles, good color reproduction and power efficiency. Although it needs more saturation for a more pleasing picture, it gets the job done. Its rear speaker also produces a good amount of volume with minimal distortion, but its location on the rear means you’ll probably want to place it rear-side up to make sure notifications don’t get muffled.

Cherry Mobile has recently started to release budget devices running on Android 7.0 Nougat. The Desire R7 Plus keeps things clean by having no skin on top of Android Nougat. You can easily customize the look with the help of launchers available in Google Play Store.

A few Cherry Mobile apps are present including Cherry Fun Club, CPlay, and Movie Club. Cherry Prepaid’s Bonus Load and prepaid account app are also present. There are still some third-party apps that are pre-installed that you can remove anytime.

The 13-megapixel main camera captures decent still images but there are situations where the images are a bit washed out and blurry. This is mostly caused by the camera’s sensor struggling to find some light in the scene. The 8-megapizel selfie-camera, on the other hand, seems to have the same issue as the front camera but much pronounced. Added to that is the slightly cold white balance in most of the shots. As for the 1080p video capability, the quality isn’t much of a difference from the stills. It has a framerate of 30fps and is only available in .3gp format. In the end, the photos and videos are certainly not bad if you consider the value you get at this price point but we wish it could’ve been better.

Here are some sample photos:

The Desire R7 Plus has a MediaTek MT6737 chipset and it’s clocked at 1.3GHz with four cores. It also has the Mali-T720 for the GPU and 3GB RAM for your multitasking needs.

Running multiple apps is quite smooth and snappy, but the phone does start to lag when it is running heavy apps for long periods of time. Generally, if you are a light user, then the 3GB RAM is more than enough for your everyday needs.

Gaming performance is generally acceptable. You can run casual games but there are certain graphics demanding titles that struggles with frame rates such as NBA 2k17. However, if you play Mobile Legends, NBA Live, or any other titles that are not that graphics intensive, then you’re perfectly fine.

Here are some benchmark scores:

Phone calls are relatively fine except for the occasional low volume quality of some calls. For connectivity, it has your standard Wi-Fi, Bluetooth, and 4G LTE capabilities. It also supports 700Mhz Band 28 for better LTE connection.

Using the PCMark (Work 2.0) battery test, it was able to last for 9 hours and 27 minutes. You could definitely last a day with a full charge. Charging the battery to 100% could last around 4hrs or so. Conclusion: A Phone for the Budget Conscious

With so many phones on the market competing each other for the budget consumers, the Desire R7 Plus might just be what you desire for its Android Nougat update and sleek aesthetic design and decent performance. For the price of Php 5,999, you might be able to see the true value of what you’re getting for. For some, it could very well be their next handset. For others, it might not cut it and would want something new and exciting. In the end, the Desire R7’s offerings are what you might expect from this price bracket. However, it’s just a matter of time until there’s a new bang-for-your-buck China phone that will shake the market and offer a little more than what Cherry Mobile and other local brands are currently showing.