Home Gadgets HTC Launches Desire 10 Pro, U Play, and U Ultra in PH! Apart from the their newest flagship, the U11, HTC also announced the availability of three other models for the Philippine market. These are the mid-range HTC Desire 10 Pro and U Play, and the high end U Ultra. On paper, the HTC Desire 10 Pro is shaping up to be a good value for PhP13,990. You get a device that sports a 5.5-inch Full HD display, an octa-core CPU, 4GB of RAM, and 64GB of built-in storage expandable with a microSD card. The HTC Desire 10 Pro runs on Android 6.0 Marshmallow with HTC Sense and packs a 3,000mAh battery capable of fast charging. 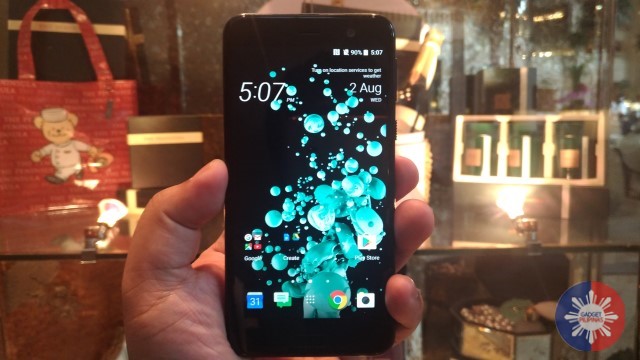 Priced at PhP18,990, the HTC U-Play is a more compact device with a 5.2-inch display, and sports the new liquid surface that transforms light as it reflects, giving the phone more depth and emphasis. The U-Play comes with HTC Sense Companion, which uses artificial intelligence to learn from you and the things that you do. For example, it can prompt you whether to disable your morning alarm for an upcoming holiday, or even remind you to bring a powerbank for a long trip. The phone is also built with improved media consumption in mind. A good example would be the HTC USonic platform, which intelligently analyzes your ears, and then adapts itself to give you the most optimal sound possible. As for the cameras, the U Play has a 16MP main camera with Optical Image Stabilization for less blurry shots, and PDAF which lets you capture every moment without a hitch. The new selfie camera also lets you switch between the full 16MP resolution, or the UltraPixel mode that delivers 4x more light sensitivity, making it suited for less than ideal conditions. The HTC U Play is powered by a MediaTek Helio P10 octa-core processor along with 4GB of RAM, and 64GB of built-in storage. It also packs a 2,500mAh battery with fast-charging capability. Sporting a stunning design made of a harmonious blend of glass and metal, the HTC U Ultra exhibits beauty from just about every angle. What sets it apart though, is the existence of a secondary display on the top section for convenient access to your apps, contacts, notifications, and more. The 12MP BSI main camera is capable of both laser of phase detection auto-focus, along with Optical Image Stabilization, 4K video recording with 3D audio, as well as slow motion video recording at 720p/30fps. It also sports a 16MP BSI front camera with UltraPixel mode. The HTC U Ultra has a 5.7-inch Quad HD display with Gorilla Glass 5 Protection, and is powered by a Qualcomm Snapdragon 821 processor with 4GB of RAM and 64GB of built-in storage. It runs on Android 7.0 Nougat out of the box and packs a 3000mAh battery compatible with Quick Charge 3.0.

The HTC Desire 10 Pro, U Play, and U Ultra are now available in Lazada.